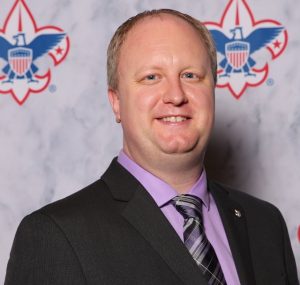 Please join us in welcoming Erik Karre to the Twin Valley Council professional staff as a District Director beginning February 16, 2018.  Erik has 14 years experience as a professional Scouter beginning his career with the Overland Trails Council headquartered in Grand Isle, NE, where he served as a District Executive and Senior District Executive.  He then moved to the Jayhawk Area Council headquartered in Topeka, KS where he has been serving as a District Director since 2015.

Erik will be moving to Fairmont, MN, where he will directly serve the units in the Cedar Valley District and also give staff leadership to the Western Prairie District Executive, Grant Diedrich.  Erik is an Eagle Scout, a graduate from Leadership Kearny, is active in Rotary being named Rotarian of the Year in 2008 from district 5630 and earning the Rotary Governor’s Award in 2012 for his work as Chair of the Rotary Youth Leadership Awards.  He has a degree in theatre from Hastings College.

Denise Zernechel has been serving the Cedar Valley District since May 2017 as the District Executive.  She will now be serving the River Stone District beginning February 16, 2018.  Denise is a Mankato native serving over 40 years in the newspaper business before changing careers into the Boy Scouts.  Denise is also active in Rotary where she serves as the Executive Secretary for the Greater Mankato Rotary Club.

Please welcome Erik and Denise into their new roles.